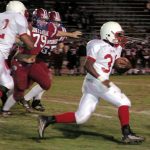 Seniors have Big Night in Season Finale Win Fitting for a team that never gave up all season to have the seniors lead the way on the season finale. Bob Jones won the opening coin toss and elected to kick off to start the game. After a couple of offensive miscues by the Panthers including 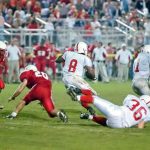 Trojans stop 5 year losing streak to Patriots with Win The Bob Jones Patriots came out for the third straight week, a 10 point plus underdog, with great intensity and effort. After tying the score just before halftime, Bob Jones gave up a big pass play that resulted in a touchdown and a seven point 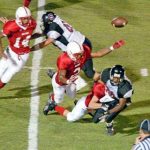 Patriot turnovers aid Senators in rival victory Bob Jones played with great energy in the first half keeping the score close but just couldn’t overcome second half turnovers to mount a charge. Sparkman started the game with a great kick-off return only to have the Patriots take the ball away after a huge hit which 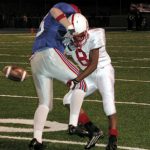 Vestavia Hills too much for Patriots Bob Jones went to Thompson Reynolds stadium with nothing to lose. Vestavia Hills was ranked 4th in the state in 6A play and the only team that has beaten nationally rank Hoover in over a year. The Patriots started the game with good emotion. After Vestavia received the opening 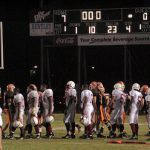 Patriots lose another close one It doesn’t seem to matter what Grissom’s record is or how much we are favored, they seem to have our number every year. Bob Jones started strong with a Kevin Perry kick-off return out to the 43 yard line. The Patriots seemed to move the ball at will in their 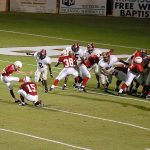 5th Ranked Decatur too much for the Patriots It didn’t take long to see why Decatur is considered the toughest team north of Birmingham. They have good size, good speed, and execute plays with precision. Tyler Leach leads the Decatur offense and at least equaled his performance tonight as he displayed last year as a 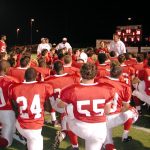 Patriots survive scare from Rebels despite turnovers Butler shocked the Patriots by running the opening kick-off all the way back for a touchdown in fourteen seconds. The Rebels missed the extra point. Bob Jones received the Butler kick-off and failed to earn a first down after three plays. The Patriots punted the ball back to 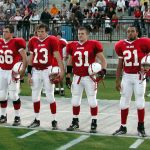 Austin takes advantage of Patriot’s miss opportunities Bob Jones started the game by kicking off to Austin after the black bears won the coin toss and chose to receive. Austin moved the ball down the field with a big pass reception on a third and fifteen to go situation. The Patriots held tight and only 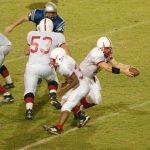 Turnovers too much to Overcome Bob Jones scored first but Florence came back with seventeen unanswered points capitalizing on three Patriot turnovers, a couple of dropped passes, and the inability to execute on short third and fourth down tries. The Patriots received the ball to start the game played at the UNA Braly stadium in Florence. 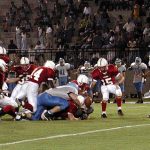 Comeback Win Congratulations to Coach Shannon Brown, his entire coaching staff, and the 2004 Bob Jones football players. After getting down by 14 points, the Patriots responded with 28 unanswered points to beat the favored Lee Generals in a packed house at Madison City stadium. Lee has been predicted to win the city championship between