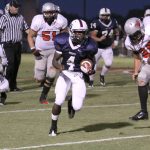 Patriots score on opening kickoff and cruise MADISON, Alabama – Hazel Green needed a fast start to gain some speed against Class 6A, Region 8 foe Bob Jones. The opposite happened when the Patriots’ Rashad Goode returned a short kickoff 58 yards for a touchdown to start the game. In just 10 seconds Bob Jones 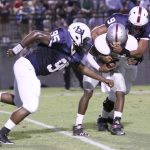 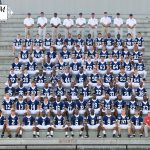 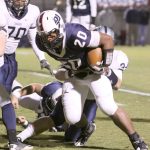 Bob Jones falls at home to Clay-Chalkville MADISON – Collins Moore knelt between the lowercase “b” and “j” at midfield late Friday night and lowered his head. Facing the visitor stands at Madison City Schools Stadium, with tears racing down his cheeks, he saw something he couldn’t believe. Another team celebrating on Bob Jones’ home 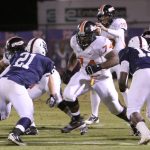 Nice Effort By Patriots Top-ranked Hoover escapes in fourth quarter for 20-13 victory MADISON – Hoover’s rushing attack that was ineffective for three quarters came to life in time to save an undefeated season. Meanwhile, Bob Jones made one last mistake it couldn’t overcome. Those two things combined added up to top-ranked Hoover winning 20-13 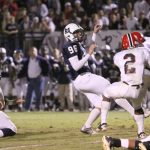 Patriots Survive In OT Bob Jones clinches Region 8 MADISON – Braden Hager made another game-winning field goal, Jeffrey Moss continued to emerge as a weapon for Bob Jones and once again the Patriots’ Collins Moore had his handprints all over the outcome. The result was fourth-ranked Bob Jones 24, third-ranked Decatur 21 in overtime 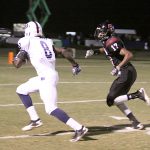 Bob Jones routs Senators HARVEST – Bob Jones High wide receiver Collins Moore did more than enough in the first half against Sparkman on Friday night. He caught four passes for 146 yards and three touchdowns before watching the second half from the sidelines. His TDs covered 73, 1 and 42 yards. The Class 6A 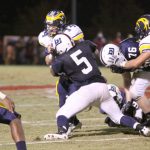 Bob Jones continues strong play at Buckhorn MADISON – Bob Jones made it a point Friday night to show that it’s no pushover when it comes to stopping the run. Or finishing out a game. Linebacker Darius Tibbs had the grass stains, the sweat and the limp to prove it. The fourth-ranked Patriots bent at 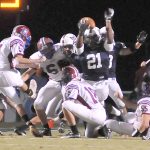 Extra Effort By Patriots MADISON – With the game on the verge of slipping away for good, fourth-ranked Bob Jones turned to the best of its multiple play-makers. Collins Moore came through. On second-and-goal at the 20-yard line in overtime, Moore got behind Huntsville’s secondary and made a diving corner catch for a touchdown. Bob 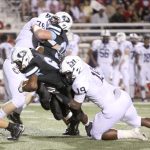 Bob Jones holds off Spain Park HOOVER – Class 6A, sixth-ranked Bob Jones got a 99-yard kickoff return for a touchdown, from Collins Moore to open the game and held off a late surge by Spain Park to win its fourth straight game Friday night. The Patriots (4-1) led by three touchdowns at half, time