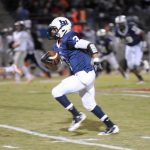 Patriots Fall in Close One MADISON — There wasn’t much to Josh Niblett’s halftime speech Friday night. Perhaps that’s because, in the Hoover football coach’s estimation, there wasn’t much to the Bucs’ effort during the first two quarters of their second-round, Class 6A playoff game against Bob Jones. “I told our kids all week it 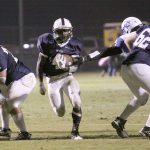 Patriots Bounce Back MADISON – Bob Jones High proved that it possesses a short memory. After last week’s defeat at Class 6A top-ranked Hoover, the Patriots defeated Tuscaloosa County in the first round of the state playoffs. “Defensively, we came back and got a shutout,” Bob Jones coach Kevin Rose said. “Obviously we rebounded from 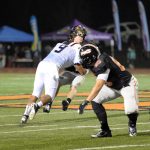 Hoover Spoils Patriots Undefeated Season Attempt HOOVER – Connor Short threw for 269 yards and two touchdowns as No. 7 Hoover (9-1) ended the regular season with a win over No. 7 Bob Jones (9-1) in a matchup of ranked Class 6A teams. Short completed 21-of-28 passes and connected with Josh Jackson on scoring strikes 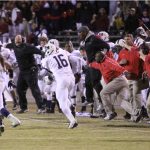 Bob Jones Finally Wins at Ogle Stadium DECATUR, Alabama – Fifth-ranked Bob Jones High and Decatur were dead even at halftime Friday night, each with three points and 98 total yards. But the visiting Patriots rode two big plays to a 17-3 win at Ogle Stadium. Unbeaten Bob Jones improved to 9-0 overall and 7-0 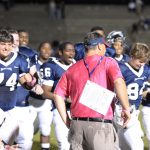 Bob Jones Clinches Region Title MADISON, Alabama – Thirty-four Bob Jones seniors helped the Patriots win the 6A, Region 8 championship on Senior Night. “This victory means a lot for us,” said senior Reggie Ragland. “It solidified as region champs. It was a very good night for us seniorwise because we went out with a 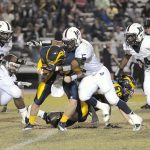 Bob Jones stays atop region pile NEW MARKET, Alabama – Bob Jones played the role of homecoming spoiler at Buckhorn. The Patriots scored on the opening possession of the game en route to the romp. After the opening kickoff, Bob Jones (7-0, 4-0 6A region 8) drove 63 yards on five plays. The drive was 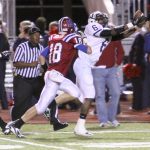 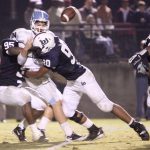 PATRIOTS ARE A WALL MADISON – Chip Lindsey has been following Bob Jones football for 20 years. The Patriots defense, he said, is “as good as I’ve seen.’’ Lindsey, a former Bob Jones player, returned to his roots Friday night as the coach of seventh-ranked Spain Park and found a rude homecoming party thrown by 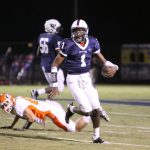 Bob Jones routs Grissom in 6A, Region 8 contest, 63-0 MADISON, Alabama – Bob Jones quarterback Jeffery Moss paced the Patriots in the first half by throwing for three touchdowns and plunging in for a 1-yard scoring run. Moss passed for 157 yards on 11 of 15 completions in the first two quarters. The Patriots 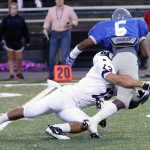 Bob Jones slips past Florence in 6A, Region 8 slugfest, 10-7 FLORENCE – The halfback pass might as well be a lead dive in Bob Jones’ playbook. “It’s a base play for us,’’ Patriots third-year coach Kevin Rose said. “We’ve completed it about 10 times since I’ve been here.’’ The 10th completion of what others