Bob Jones traveled to Fairhope High School on Thursday and defeated Fairhope (58-24) and Spanish Fort (46-33) in dual action to improve to 7-0 on the season. On Friday and Saturday, they competed in a 40 man bracket southeast United States tournament and placed 5 wrestlers! 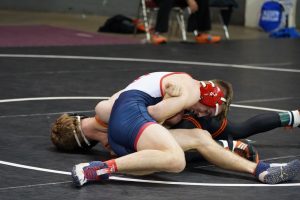 Manny Marrero shown above getting the pin over Catholic High School (LA) to clinch his spot on the podium.