Bob Jones is heading to the Class 7A baseball championship series.

The top-ranked Patriots (41-9) scored the game-winning run in the 13th inning when Tyler Jones drew a bases-loaded walk to score John Riley and earn a 5-4 victory today in Game 2 of a best-of-three Class 7A semifinal series at Phil English Field in Trussville. Bob Jones won Game 1 on Friday.

The dramatic ending came after Auburn commit Slate Alford hit a solo homer in the bottom of the ninth inning — yes, the road team bats last in Game 2 of each AHSAA baseball playoff baseball series — to tie the game at 4-all and extend it.

“The play of the game probably, they take the lead,” Bob Jones coach Jared Smith said. “Slate Alford, after making two errors in the field, could be in his head and be all worried about that, and he hits a solo homer to give us another chance in extras.” 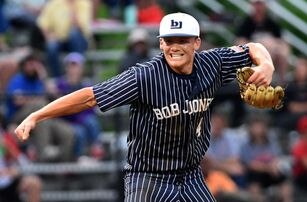 Bob Jones scored in the third inning on Auburn commit Cam Hill’s RBI double that scored Stuart Edge, followed by a RBI single from starting pitcher Dylan Ray, who finished his day on the mound after allowing three runs off six hits with four walks and eight Ks in six innings of work.

The Patriots added run in the fifth when Hill singled to score designated hitter Michael Strickland.

Hewitt-Trussville tied the game at 3-all in the seventh on back-to-back RBIs from Tyler Mauldin, who scored Jackson Holland on a single, and Jacob Bishop, who scored Keith Lanum on a fielder’s choice. That sent the game into extra innings.

The Huskies (33-9) took their first lead in the top of the ninth inning on a RBI single from Hudson Boren, scoring Kerrigan Edmonson.

Alford answered by leading off the bottom of the ninth with his solo homer into deep left.

In the 13th, the Patriots loaded the bases on a double, single and intentional walk to bring Jones to the plate, who drew the game-winning walk to score Riley.

Hewitt-Trussville starter Skylar Jones went six innings, allowing three runs off six hits with one walk and eight strikeouts, before giving up to Parker, who took the loss and allowed four hits with four walks and three strikeouts.

Wright got the win for Bob Jones and allowed no runs or hits and got the final two outs.

Stat leaders: Ray went 2-for-5 with a RBI single for Bob Jones and Hill was also 2-for-5 but with two RBIs. Ray allowed three runs off six hits with four walks and eight strkeouts iin six innings of work.

Did you know? The Patriots, under Smith, were 0-7 against Hewitt-Trussville until this two-game sweep.

Coachspeak: “Yesterday we had a 3-0 lead, blew it and then came back and won. Then today, a 3-1 lead and kind of blow it. I probably left Dylan in there too much but thought he’d get another out. Our guys really responded well and, once again, we’ve been there before and they know how to do it. It took a total team effort, Sam Maynard and Andrew Wright came out of the bullpen and just kept us in the game.” — Smith

What’s next?: The Patriots advance to face the McGill-Toolen in the Class 7A championship series next week in Montgomery. The first game of the best-of-three series is scheduled for Friday, at Paterson Field with first pitch set for 6 p.m.

Bob Jones defeated Hewitt-Trussville 5-3 in Game 1 of a Class 7A baseball semifinal series, but rains then wiped out Game 2 at Phil English Field in Trussville.

The second game of the best-of-three series is scheduled for 11 a.m. Saturday.

Hewitt-Trussville rallied in the seventh to tie today’s game, but Bob Jones (40-9) rallied for the victory.

“We just had to regroup,” Bob Jones coach Jared Smith said. “We were all kind of panicking, I was panicking as coach too much, and the kids were, too. But I told the kids after we got out the inning that champions face adversity and you have to bounce back from that.”

“I don’t think many teams could give up a three-run lead in the last inning, lose all momentum, and still be able to win the game,” he added. “Really pound of our guys for being gritty and fighting through it because they could have folded when it was 3-3 and we found a way to score two big runs.”

Bob Jones took a 2-0 lead in the first frame with a two-RBI single from Auburn commit Slate Alford that scored Alabama commit Dylan Ray, who reached on an error. The Patriots added another run to its lead in the fourth inning on a RBI double from Michael Strickland that scored Alford for a3-0 lead.

The Huskies led off the bottom of the seventh inning with two hit batters and a walk to load the bases with no outs, and two more walks brought Julian Sauger and Creed Parker across the plate to cut the deficit to 3-2.

With the bases loaded, Tyler Mauldin’s fielder’s choice brought Trey Burrell home to tie the game, but Kerrigan Edmonson was called out at second base followed by consecutive outs to end the inning.

Bob Jones scored the go-ahead run with their third at-bat of the final frame with a RBI triple from Colten Carver that brought Ray home from first base. Stuart Edge’s sacrifice fly brought Carver home for the final run.

Hewitt-Trussville (33-8) managed to get a runner on base in the bottom of the eighth, but three consecutive outs ended the threat and the game. Although he went seven innings with a chance for the win, LSU commit and Hewitt-Trussville starter Michael Fowler took the loss after striking out 10 in 7 1/3 innings.

Auburn commit Camden Hill got the Game 1 victory, allowing no runs or hits with three walks and one strikeout in two innings of work.

Star of the game: Carver. The senior centerfielder was only 1-for-3 but brought the go-ahead run home on a RBI triple to deep center in the top of the eighth inning.

“We only had one out and I had to score any way possible, whether it was a groundball or a sac fly,” he said. “I missed the fastball earlier (in the at-bat), but happened to get another fastball. I put a good swing on it and got a triple.”

Stat leaders: The Patriots has six batters record hits with Strickland leading the way by going 2-for-2 with a RBI double in the fourth inning. Texas commit Mitchell Daly was 2-for-4 with two doubles.

Hewitt-Trussville was led by Hudson Boren, who went 2-for-4, and Mauldin, who did not record a hit but did have an RBI on a fielder’s choice in the seventh inning. Zach Defnall and Keith Lanum were each 1-for-3 while Jacob Bishop was 1-for-4 in the game.

Iron Bowl, y’all: Alford (an Auburn commit) drove in Ray (an Alabama commit) on a two-RBI single in the first inning.

Coachspeak: “I think it showed the character of out team that we’ve had all year. We lost Game 1 to Oak Mountain two weeks ago and showed character coming back. Then there in the seventh inning, you’re down three runs to the number one team in the state, and our kids showed a lot of resiliency in scoring three runs. But we forced extra innings and tip your hat to them, they got the job in the eighth inning and we didn’t. But then again, we get to play tomorrow so we still got a chance.” — Hewitt-Trussville coach Jeff Mauldin