Former Bob Jones baseball players Trey Wingenter has been called up to the San Diego Padres.  Wingenter graduated in 2012 before moving on to pitch at Auburn for three years.

The San Diego Padres are adding Trey Wingenter to the bullpen mix. This is his first major league call-up. 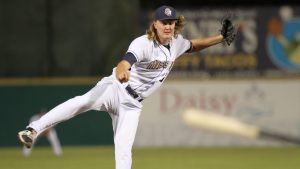 It has finally started! Before Sunday afternoon’s series finale against the Chicago Cubs, the San Diego Padres will call-up RHP Trey Wingenter from AAA El Paso. He is expected to make his major league debut at some point in today’s game at Wrigley Field.

First reported by San Diego Union-Tribune’s Keven Acee, Wingenter will be added to the 40-man roster, taking the final open slot available. As of this writing, the Padres have not made the move official, meaning we aren’t sure who will be leaving the 25-man roster, at the moment (will be updated once that information is released by the team).

Wingenter will bring his 6’7″200-pound frame and ability to reach 100 mph to the Padres’ bullpen after a highly successful minor league career. Originally drafted in the 17th round of the 2015 draft out of Auburn University, Wingenter has 44 innings under his belt this season, pitching to a 3.45 ERA, 1.20 WHIP, and a .185 batting average against him. More than 28% of hitters have fallen victim to a strikeout against Wingenter.

With a three-quarter delivery, a 6’7″ frame, and a fastball that routinely sits in the upper-90s, Wingenter has been highly effective against right-handed hitters. His main secondary pitch is his sweeping slider that righties struggle to hit.

Since the beginning of June, Wingenter has made 19 appearances, giving up runs in just two of those outings. He hasn’t given up a run since July 12th and has allowed just two hits over his last seven innings pitched.

There is one word of caution with Wingenter, just to be aware of. His command can be a bit wild at times. His walk rate over the last three seasons has increased year-by-year. In El Paso, Wingenter walked nearly five hitters/nine innings (12.8%).