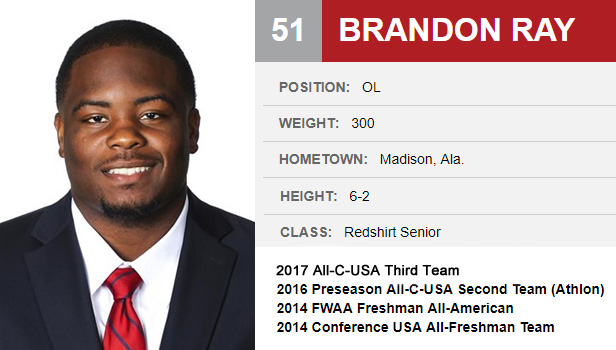 2017 (r-Sr.) Ray made his 53rd career – and consecutive – start at FIU, setting the all-time WKU program record for starts by an offensive or defensive player. The Madison, Ala., native helped lead the Hilltoppers to the best passing offense in C-USA (334 yards per game) and the No. 9 passing offense in the country.

2016 (r-Jr.) | 14/14: WKU’s mauler on the inside, Ray built on his reputation as one of the nation’s top offensive guards with another stellar season at left guard where he started 14 consecutive games, continuing a streak which has seen him start every game of his career, 41-straight by the end of 2016. Ray helped pave the way for Anthony Wales’ FBS-best 13.4 points per game and 29 touchdowns, including a school record 27 on the ground. He also helped anchor the nation’s top scoring offense and keep quarterback Mike White upright as he led C-USA in Passing Efficiency. Adjusting sacks allowed for pass attempts, the Hilltoppers ranked No. 27 nationally in pass blocking efficiency, allowing a sack just four percent of the time (22 sacks on 471 attempts).

2015 (r-So.) | 14/14: Ray continued to perform as a sophomore and became one of WKU’s top offensive linemen during the 2015 campaign. Ray started all 14 games for the Hilltoppers at left guard on a line that finished the year No. 19 nationally in Sacks Allowed, with just 16 despite 554 dropbacks, the seventh-best percentage nationally and second among teams with 500 or more passing attempts. The line also paved the way for a sixth-consecutive 1,000-yard rusher and broke the school Total Offense record for the third consecutive season, the second two with Ray at left guard.

2014 (r-Fr.) | 13/13: In his first season on The Hill, Ray started every game at left guard as he became the school’s second Football Writer’s Association of America Freshman All-American since 2011. Ray was also named to the C-USA All-Freshman team and graded out as WKU’s second-best lineman during the regular season. His athleticism and pulling ability generated big run plays down the stretch to help RB Leon Allen rush for 750 yards in a five-game win streak, including two performances of 230 yards or more, to end the season. He was a vital piece of Allen’s Conference USA-record 345 yards versus Army, consistently pulling on sweeps to pile up chunk yardage.

HS/Misc.: Ray enjoyed a successful playing career at Bob Jones High School in Alabama. Ray was part of a 2012 team that went 9-4, advancing to the second round of the Alabama state playoffs. Ray anchored a Patriot front line that helped Bob Jones average close to 30 points per game in his senior season and over 35 points per game during his junior campaign of 2011. In his final two years of high school, Ray led Bob Jones to a 19-6 record, including a perfect 11-0 mark at home. The offensive lineman was named a Class 6A All-State Honorable Mention performer in the state of Alabama in 2012 while also being named to the Huntsville Times Elite First Team after putting together 65 pancake blocks in 13 games. Ray was also named to the Huntsville Times Elite Second Team following his junior season in 2011.