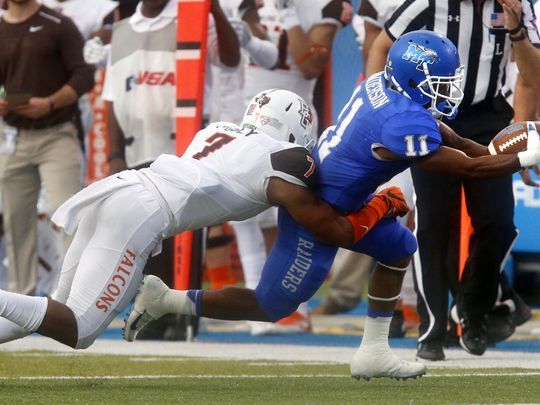 Brad is a freshman at MTSU this year after lettering in football and track at Bob Jones High School last year. Brad earned all-state, all-region and all-Huntsville his senior year and set a state record with two 99-yard touchdowns in the same game. As a junior, he caught 33 passes for 651 yards and four touchdowns, and ran for 360 yards and five scores. Brad was the Homecoming King and maintained a 4.0 GPA and played for current BJHS Coach Kevin Rose.

Anderson, who started at running back, was all over the place as MTSU’s sparkplug. The 5-foot-8, 170-pound back had 16 carries for 104 yards and six catches for 98 yards and a touchdown.

“Anytime we can have a young guy step up and play the way that Brad did is big,” Urzua said. “He had a hell of a game.”

Anderson had five carries last week against Minnesota, and MTSU coach Rick Stockstill said a goal of MTSU’s was to get the freshman more involved against Bowling Green.

“It’s a great feeling to finally have this opportunity,” Anderson said. “I was waiting on my chance and coach told me I would have an opportunity this week to play more and I just was looking forward to it. And being behind the O-line, I mean they made it easy.

“This was definitely a momentum swing for our team because we felt like we had to get back to the basics of our running game because we couldn’t get stuff established and get going. So for us tonight to be able to have a running game like (we did), it means a lot for us.”