NEW MARKET – With what looked like a certain victory just seconds earlier on the verge of slipping away, senior middle linebacker Keith Young made the biggest play of a football season opener filled with them. Young stepped in front of a Bob Jones receiver and knocked down a pass in the end zone as time expired to preserve Buckhorn’s thrilling 21-14 victory Friday night. The game was also the Class 6A, Region 8 opener for both teams. “I knew they were crossing behind me,’ Young said. “I saw the receiver out of the corner of my eye and then disappear. I dropped it, didn’t catch it. But we won.’ Buckhorn turned a recovered fumble into a game-tying touchdown in the first half, then turned the game over to running backs Marquis Smith and Lemeco Miller in the second. Smith finished with 143 yards on 25 carries and three touchdowns. Miller had 106 yards on 18 carries. Of that total, 162 came in the second half. “I thought we played hard and the kids laid it on the line,’ Buckhorn coach Michael Jackson said. “We made a lot of first-game mistakes, but I’m excited about the way the kids played. 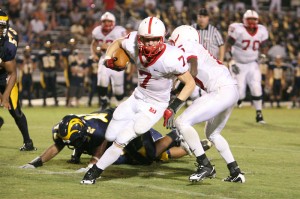